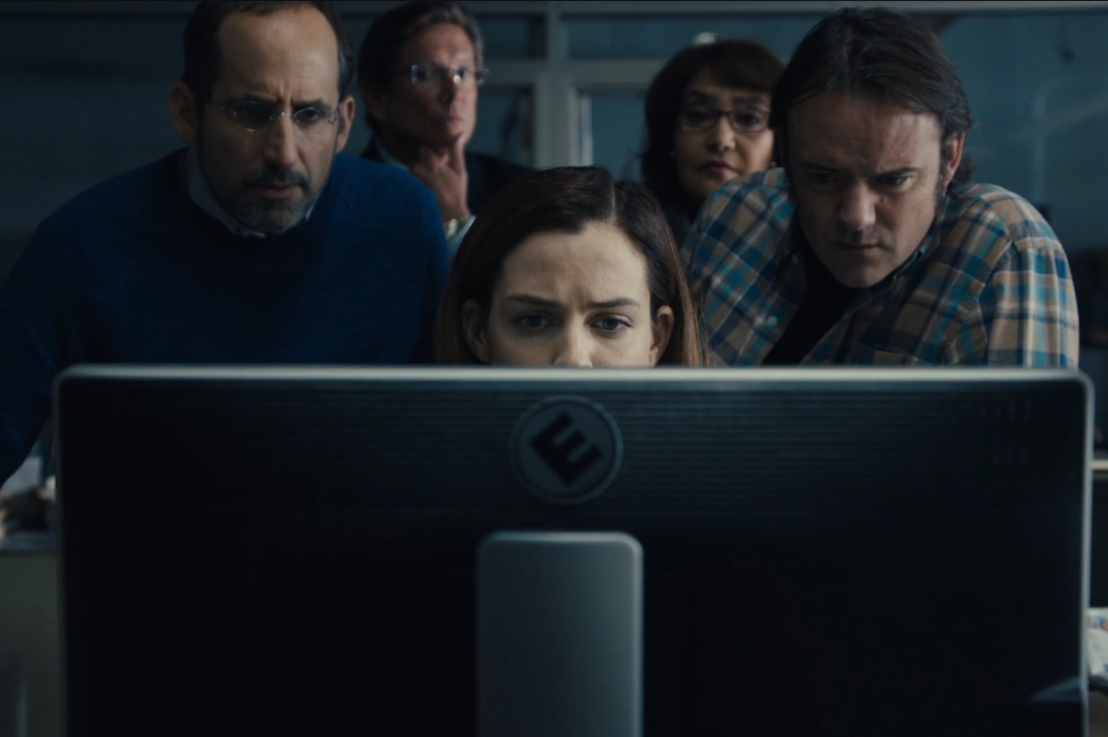 In a scene near the beginning of Barry Levinson’s Paterno, which debuted on HBO this past Saturday, reporters from Harrisburg Pennsylvania’s Patriot-News huddle around a computer monitor to read the criminal charges filed against retired football coach Jerry Sandusky. As the camera shows the team glued to the screen, the back of the computer display shows the logo of E Corp, the fictional mega-conglomerate in USA Network’s Mr. Robot. Wait… what?

In a wider shot, it’s clear the monitors are from Dell Computer, whose rotated E in the company’s logo bears a casual resemblance to the E Corp logo, but the visual identities of the two are distinct. The logo in the close-up is E Corp.

It’s not clear why the original logo was swapped out for that of E Corp. Perhaps it was a clearance issue. Or, more likely, the production team felt that a shot that features the logo so prominently would look like a product placement or would otherwise detract from the drama of the moment. So some clever person — perhaps a Mr. Robot fan — must have dropped in the E Corp logo (likely in post production).

This approach might come in handy for other productions. Just as movie phone numbers are typically from the non-existent KL5 (555) exchange, there are instances in which substituting a fictional logo for an actual one solves problems of clearances or audience focus. E Corp could become the KLondike-5 of corporate branding in movies and television, the Alan Smithee of corporate identity.

Were E Corp to appear more broadly across movie and TV properties it would, no doubt, give rise to marvelous fan theories about how it all ties together within the universe of Mr. Robot.

It may be time to update the Tommy Westphall Universe Hypothesis to realize that most of what we see on television is, in fact, all in the mind of Mr. Robot’s Elliot Alderson.

The image from Paterno is from a copyrighted film, the copyright for which is most likely owned by the film’s production company and/or distributor and possibly also by any actors appearing in the image. It is believed that the use of a web-resolution screenshot for identification and critical commentary on the film and its contents qualifies as fair use under United States copyright law.

Thanks to Brian Jason Ford for suggesting the Tommy Westphall reference.