East Coast Comic Con (or Comicon as it is officially listed) returned to the Meadowlands Exposition Center in Secaucus, New Jersey, this past weekend. Started in 2012 as a small show in Asbury Park with only 32 vendor tables, the show has expanded to become a medium-sized three-day pop culture festival. The event features guests from the worlds of both comic books and pop culture movies and television.

This year’s show offered a particularly strong lineup of comics creators, including several storied writers and artists whose careers reach back to comic books’ Silver Age.

Among the latter were famed inker Joe Sinnott, still going strong at 91 years, who greeted fans and autographed copies of the comics on which he worked.

While most of the attention of comics creators is directed toward the fans, comic conventions are also valuable for networking among creative professionals. It’s exciting to witness comics legends coming together to share thoughts. Industry icons Roy Thomas and Jim Starlin engaged in an extended conversation before posing for photos and signing autographs for fans. Featured panelists writer/artist Howard Chaykin and animator J.J. Sedelmaier met for the first time at the former’s panel session.

The show floor featured vendors of comic books and other pop culture items such as Funko Pop figures, scary masks, and movie posters. Other than a few outliers (mostly telecom companies), the exhibit hall was mercifully free of the booths unrelated to pop culture frequently seen at many of the larger comic cons.

Among the more interesting booths were Metalsouls, with sculptures cleverly constructed from miscellaneous metal parts, and Firecolors and Butterfly Cages, showing illuminated illustrations rendered in wax. The vendor with the longest line was grading company CGC (Certified Guaranty Company) with a steady stream of customers eager to have their comics graded and encased in protective plastic slabs.

Editor and writer Jon B. Cooke led a freewheeling conversation with the always candid and entertaining
writer/artist Howard Chaykin.

Artist Keith Giffen, co-creator of Rocket Raccoon, and Guardians of the Galaxy artist Aaron Kuder discussed their work on the Guardians and how the characters have evolved over time, in a panel led by moderator Peter Melnick.

Lee Meriwether spoke with 13th Dimension’s Dan Greenfield about her long career in acting, from her early role in 4D Man through her iconic portrayal of Catwoman in the 1966 Batman movie and her roles on The Time Tunnel, Star Trek, Barnaby Jones, and many other programs. One interesting tidbit from the conversation: Meriwether mentioned she was originally offered a role in 1958’s The Blob, but had to turn it down because of her commitment to The Today Show. When the same team went on to their next film, Meriwether was then available and made her feature film debut in 4D Man.

Illustrator and film director/producer J.J. Sedelmaier, in conversation with editor Dan Greenfield, showed an extended demo reel of his work, including his Saturday Night Live segments done with Robert Smigel and years of his inventive — and, at times, rather subversive — advertising spots.

East Coast Comic Con also featured an array of pop culture vehicles: several versions of Starsky & Hutch‘s two-door Ford Gran Torino, including two screen-used vehicles; two cars built by George Barris for The Munsters television program; the Monkeemobile, the Pontiac GTO built by Dean Jeffries for The Monkees television program; and the Batmobile and the original sidecar version of the Batcycle from the Batman television series.

Cosplay highlights seen roaming the show floor on Saturday included a striking implementation of one of “Those We Don’t Speak Of” — the creature from M. Night Shyamalan’s The Village. Also spotted were a full 7-foot version of Chewbacca, a homemade Black Manta, and a charming Princess Leia.

For the full 100-plus image photo gallery from East Coast Comic Con see the Flickr gallery: 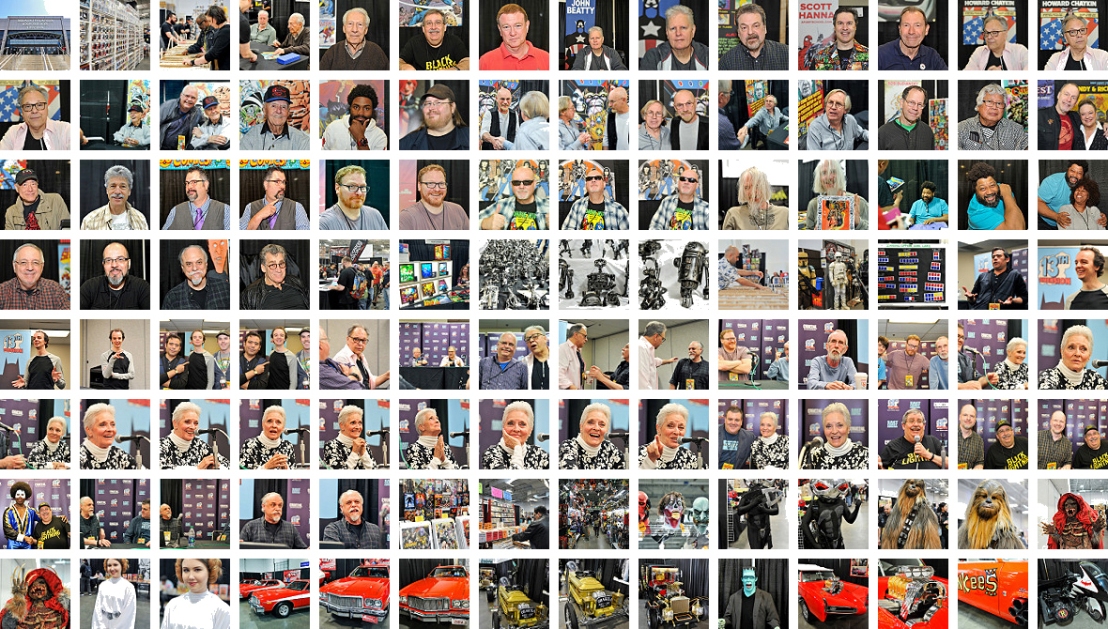