Journalist and blogger Scott Kirsner, who frequently writes on topics at the intersection of movies and technology, has published an early edition of his forthcoming book Inventing the Movies. Subtitled “Hollywood’s Epic Battle Between Innovation and the Status Quo, from Thomas Edison to Steve Jobs,” the book is a fascinating case study in the difficulties of introducing technological change in an industry that carefully guards its well-entrenched business models.

Kirsner categorizes those who face technological change into three groups:

The book posits that much of the history of technical progress consists of the struggle between the innovators who want to move forward and the preservationists who want to protect the status quo. While this pattern repeats itself throughout the evolution of the cinema, a more nuanced view of history also emerges from reading Kirsner’s detailed chronicle. The true enemy of progress may not be fear of technological change per se but, rather, the apprehension of undermining a successful business model. It’s often more about the way the money flows than the particular technologies used in movie production and distribution.

While the motion picture industry provides a wealth of examples of this tension between technological progress and business stasis, as Kirsner points out, this conflict is not unique to the movie business:

Although it may have a slightly higher glam factor than, say, the insurance business, Hollywood is a perfect case study for the way that any big, successful, well-established industry responds to new ideas.

While technological progress may appear to be inevitable, the amount of money riding on each major studio release tends to tilt the scales in favor of those who want to preserve the status quo. The fear that a new technology will upset the (very profitable) apple cart runs throughout Kirsner’s book, which spans the entire history of the cinema — from its origins in the late 19th century up to the present.

The tension between business and technology existed from the dawn of the movies. No less a figure than Thomas Edison, whose laboratory created some of the technology that made motion pictures possible, missed much of the potential presented by the new technology. 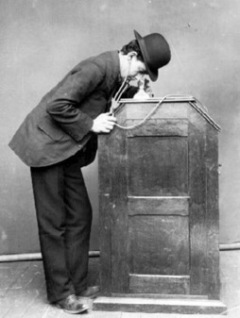 The Wizard of Menlo Park was convinced that movies should be viewed by people individually peering into boxes known as Kinetoscopes to watch short strips of film. Edison’s view was, no doubt, influenced by the fact that he hoped to build a profitable business manufacturing and selling Kinetoscopes. Kirsner cites Edison as saying:

“We are making these peep show machines and selling a lot of them at a good profit,” Edison said. “If we put out a screen machine there will be a use for maybe about ten of them in the whole United States. With that many screen machines, you could show the pictures to everyone in the country — and then it would be done. Let’s not kill the goose that lays the golden egg.”

And thus it was with most of the technological advances in the cinema. Inventions were resisted for fear of killing “the goose that lays the golden egg.”

“Who the hell wants to hear actors talk?” Warner brother Harry is quoted as saying during the heyday of the silent cinema. But the rise of radio spurred sound movies forward — in part because the audio technology developed for radio improved the techniques for reproducing sound. But also because radio provided entertainment delivered directly to the home — and for free! The movies needed to compete.

Similarly, widescreen formats — which Hollywood originally explored as early as the 1920s — didn’t generate much enthusiasm among studios or theater owners until television again threatened to keep audiences entertained in their homes in the early 1950s.

As the movie industry became more fragmented (and more complex) once the studios were divested of their theater chains by the Supreme Court in 1948, the conflicting interests of movie producers and theatrical exhibitors created additional impediments to progress. The slow transition toward digital projection (which is still underway) is a case in point.

Movie distributors spend significant amounts of money producing and shipping celluloid prints of their films. For the studios, digital distribution is a huge financial win. But the cost of upgrading theaters to digital projection is estimated to cost between $100,000 to $250,000 per screen — not very appealing if you’re an exhibitor. Despite various schemes to share the costs of the digital conversion between the studios and the exhibitors, theater owners remained generally unenthusiastic. As Kirsner writes, “Though the technology [for digital projection] was improving, the issue of who would pay for what seemed like it might derail digital cinema.”

These are just a few of the colorful examples explored in Kirsner’s book, which explores all the major technological advances in the cinema — from the introduction of sound, color, and widescreen formats, to digital projection, digital cameras (“filming without film”), and the new business models ushered in by the Worldwide Web. Inventing the Movies is recommended reading for anyone interested in the history of the movies or in how technological change can get bogged down by the fear of undermining the entrenched business models in any industry.

Inventing the Movies is available in paperback from Amazon.com or as a digital ebook from Lulu.com. The digital version is an unrestricted PDF file, so you’re free to print the document, cut and paste the text for easy citation, or add your own notes and bookmarks.

Additional insights from Kirsner appear regularly on his CinemaTech blog.

The photo of the Kinetoscope is from the Wikimedia Commons and is believed to be in the public domain in the United States. The cover image of Inventing the Movies is copyright 2008 by Scott  Kirsner and used by permission.

One thought on ““Inventing the Movies”: The Tension between Technological Progress and Resistance to Change”