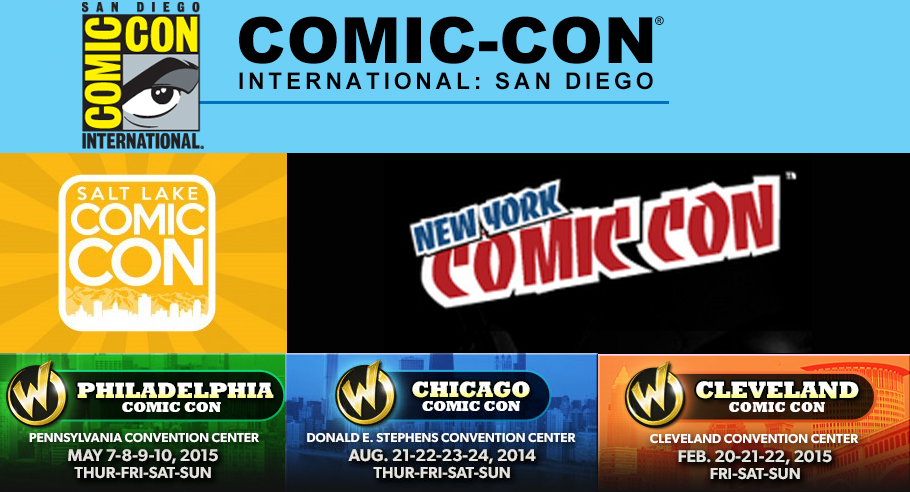 It’s a common occurrence: I tell a friend I’m going to San Diego Comic-Con and receive the reply, “Oh, yeah. I went to the one in Philly.” Or New York, or Chicago, or Cleveland or any of dozens of other cities. It’s awkward explaining that yes, you went to a comic con, but not what is generally considered the comic con: Comic-Con International: San Diego, otherwise known as San Diego Comic-Con or simply SDCC.

The organization that runs the annual convention in San Diego for fans of comic books, movies, TV, and all things pop culture has taken legal action to clarify the confusion, at least in regard to one fan convention. A lawyer representing Comic-Con International: San Diego has sent a cease-and-desist letter to the organizers of Salt Lake Comic Con over their use of “Comic Con” in the name of the Utah convention, according to an Associated Press report. The issue may ultimately hinge on the difference — if any — between “comic-con” and “comic con.” (More on that pesky hyphen shortly.)

The Utah event, reported to be the third-largest comic con in the U.S. with an attendance of 72,000 people last year, is one of dozens of similar — and similarly named — activities around the globe run by different organizations. The ReedPop division of multinational publisher Reed Elsevier hosts New York Comic Con, an event that last year boasted attendance numbers on par with San Diego Comic-Con. Wizard World Inc. puts on two dozen Wizard World Comic Cons in cities around the U.S.  Smaller, regionally-focused comic cons are available in many other cities and towns.

Given the broad adoption of the term “comic con,” why would the organizers of San Diego Comic-Con go after Salt Lake Comic Con rather than the larger and longer-running New York Comic Con or the rapidly expanding Wizard World cons?

The immediate trigger of the legal move was a marketing ploy by the Salt Lake event at San Diego Comic-Con which included driving a car through downtown San Diego advertising the name and dates of the Utah fan fest.

Comic Con International may also believe it will be easier to prevail against Salt Lake Comic Con as a first step in tightening control of its brand image. According to the event’s website, Salt Lake Comic Con is a Dan Farr Production, produced in partnership with MediaOne of Utah — perhaps a less daunting opponent than Reed Elsevier or Wizard World.

In the AP report Bryan Brandenburg, a co-founder of the Salt Lake City event, asserts that San Diego Comic-Con “tried and failed to trademark ‘Comic Con’ in 1995.”

San Diego Comic Convention does, however, hold trademark Registration Number 3219568 for “COMIC-CON” (spelled with a hyphen) covering “Education and entertainment services, namely, organizing and conducting conventions in the fields of animation, comic books and popular art.” San Diego Comic Convention holds other trademarks related to the event, including SDCC and PREVIEW NIGHT, along with a number of trademarks for events that don’t currently exist under the names listed, including ANAHEIM COMIC-CON, SAN FRANCISCO COMIC-CON, and LOS ANGELES COMIC-CON. Even though Comic-Con International also runs WonderCon, an event nearly identical to their San Diego Comic-Con in all aspects other than its size, they don’t use the ‘Comic-Con’ name for that event.

Most of the non-San Diego fan conventions eschew using the hyphen in their names, opting — perhaps for legal reasons — to use “comic con” (with a space between the two words) or variant spellings such as comiccon or comicon. Ironically, among the trademarks held by San Diego Comic Convention are “COMIC CON INTERNATIONAL” and “SAN DIEGO COMIC CON INTERNATIONAL,” both without the hyphen.

Does a trademark on “COMIC-CON” cover “COMIC CON” — and perhaps COMICCON and COMICON as well? If the issue is eventually settled by the courts, it will be interesting to see how the law views the presence or absence of the hyphen in identically-sounding terms.

The dispute has now moved to the courts. Comic-Con International has filed a lawsuit against the organizers of Salt Lake Comic Con in the U.S. District Court in Southern California over the use of the name “Comic Con,” reports the Salt Lake Tribune.

Settlement talks between the organizers of San Diego Comic-Con and Salt Lake Comic Con have broken down and both sides are asking a judge to settle the dispute over the naming rights of these events, reports the New York Times.

Writing for Forbes.com, Rob Salkowitz provides a detailed review of the situation. Regarding the infamous hyphen in “Comic-Con,” Salkowitz writes, “Based on the filing, SDCC clearly believes their trademark covers both ‘Comic-Con’ and ‘Comic Con’ (as well as ComiCon and other variants).” Underscoring the brand confusion engendered by the widespread use of the term, he notes, “When the gang on The Big Bang Theory says they are going to ‘comic con,’ they are talking about San Diego, not Salt Lake City or anywhere else.”

The jury in a Federal District Court in San Diego has found in favor of Comic Con International (CCI), organizers of Comic-Con International: San Diego, in their suit against the organizers of Salt Lake Comic Con over use of the “Comic Con” trademark. CCI was awarded $20,000 in damages, significantly less than the $12 million to non-profit organization was seeking.

In the latest turn of events in this saga, U.S. District Judge Anthony Battaglia has ordered the organizers of the Salt Lake City convention to pay nearly $4 million in attorney fees and legal costs. The judge also granted an injunction barring the organizers of the Salt Lake City event, Dan Farr Productions, from using “Comic Con,” “Comic-Con,” “or any phonetic equivalents” (presumably, words like “comiccon” and “comicon”) in any merchandise or marking materials.

The principals in Dan Farr Productions have stated their intention to appeal the verdict.