On my one night out in downtown Chicago while attending Adobe’s MAX 2007 conference, I visited the Billy Goat Tavern, the place made famous by the Saturday Night Live skit with John Belushi and Dan Ackroyd that gave us the catchphrases “cheezborger, cheezborger, cheezborger,” “no fries — cheeps” and “no Coke — Pepsi.”

In contrast with Boston’s Bull and Finch Pub, which lost much of its original charm after it became famous as the inspiration for television’s Cheers, the Billy Goat’s brief period of TV fame doesn’t seem to have changed the place much. The Billy Goat Tavern still is — by any reasonable definition — a dive. 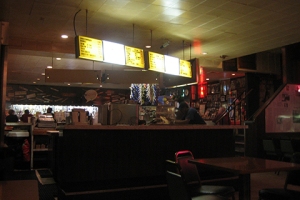 Except for two tourists who entered as I was about to leave, the place appeared to be occupied entirely by locals. As further evidence of its authenticity, I was the only person sitting in the “no smoking” section of the restaurant. The other half — the side with the bar — was filled with regulars who looked like they had spent a lifetime in their seats.

My waitress/cook had her sassy banter down pat.

In response to my ordering a cheeseburger she quickly replied with, “You want a double?”

“My ten-year-old eats a double. I’m making you a double.”

It’s a nice bit of shtick.

The waitress — pointedly acknowledging my obvious tourist status — said, “Come on — you know we don’t have fries. Chips! You want regular or barbecue?”

But, contrary to comedic folklore, they serve Coke, not Pepsi. According to the my waitress, they’ve always provided Coke. Why did SNL put it the other way ’round? The waitress thought it might have been some sort of marketing partnership with between NBC and Pepsi. But who knows?

Perhaps most noteworthy about the Billy Goat is its location. The street address is 430 N. Michigan Avenue. As you walk across the Chicago river on Michigan Ave, you pass the famous Wrigley Building and the Chicago Tribune Tower. Arriving at 430 N, there’s no tavern in sight. In fact, there’s nothing that looks vaguely like where a Tavern — even one much classier than the Billy Goat — would be found. The building at 430 N. Michigan is a sleek steel and glass structure situated in the midst Chicago’s Magnificent Mile. Where’s the beer and burger joint?

It’s underground, on a lower level. Although there is little indication from above ground, Michigan Avenue is a two-level roadway. On the top are up-scale shops and high-rent buildings. Underneath is another world. Iron girders support the roadway and the buildings above. Lanes of underground traffic weave between the iron pillars. Yellow street lights give the scene an unearthly, sulfurous glow.

As you enter the Billy Goat, you wonder if the “Enter at Your Own Risk” sign is really a joke. To go in, you have to descend a few more steps further down into the tavern.

But once inside, the grimy vibe is somehow comforting — a sheltering cave that has embraced generations of weary writers from the Tribune and the Sun Times as well as exhausted Second City comedians who wanted to escape the world above for few hours over a beer and a double cheeseburger. And perhaps some chips.