In the world of David Lynch, there are no coincidences. Or maybe everything is coincidence. But in the Lynchian world, coincidences are full of meaning.

Consider, for example,  Lynch’s explanation of the title of his most recent feature film, INLAND EMPIRE, in his book Catching the Big Fish:

One day, still very early in the process, I was talking to Laura Dern and learned that her now husband, Ben Harper, is from the Inland Empire in Los Angeles. We were talking along, and she mentioned that. I don’t know when it popped up, but I said, “That is the title of this film.” I knew nothing about the film at the time. But I wanted to call it INLAND EMPIRE.

My parents have a log cabin up in Montana. And my brother, cleaning up there one day, found a scrapbook behind a dresser. He sent it to me, because it was my little scrapbook from when I was five years old, from when I lived in Spokane, Washington. I opened up this scrapbook, and the first picture in it was an aerial view of Spokane. And underneath it said, “Inland Empire.” So I figured I was on the right track. 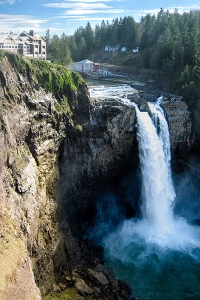 On a recent trip to the Seattle area for meetings with Microsoft, I found myself with a few hours of free time. So, like any good David Lynch fan, I zipped over to Snoqualmie and North Bend — the world of David Lynch’s Twin Peaks. 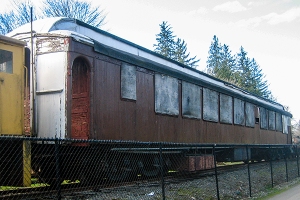 Near the log is a collection of antique railroad cars by the side of the road, part of the nearby Railway Museum. The term “museum,” however, doesn’t seem particularly apt for this collection of derelict equipment, exposed to the elements and all worse for the wear. The car used in the Twin Peaks pilot episode is no longer located here (see the analysis at More in Twin Peaks), but many similar cars remain.

While the outdoor setting may not be optimal for preserving these relics, the peeling paint and rotting wood evoke the horrible crime that is the central event in the Twin Peaks narrative. 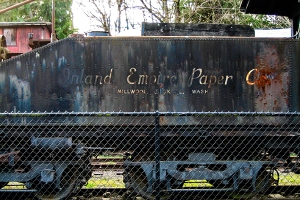 Behind a rusting locomotive is a coal car. Faintly visible in the fading paint it reads: “Inland Empire Paper Co.” and underneath, in smaller lettering, “Millwood (Spokane, Wash).”

Weird. I mean, what are the odds? I’m sure it’s just a coincidence.

But I wonder what it means…