Before Captain America was the star of last summer’s blockbuster movie, he was a comic book superhero. The man who co-created the character over 70 years ago, comic book writer and artist Joe Simon, passed away this past Wednesday in New York.

Two months earlier, Simon spoke at New York Comic Con, a convention for fans of comic books and popular culture. It was three days after Simon’s 98th birthday, and as he entered the meeting room at the Javits Center, the enthusiastic crowd sang “Happy Birthday” to the comic hero creator. 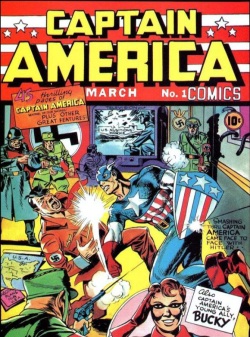 The cover of the first issue of Captain America shows the character and his side-kick Bucky fighting Nazis, with the Captain himself socking Adolf Hitler on the jaw. Looking at the illustration now, it’s easy to write it off as typical American wartime propaganda.

But look closely at the issue date. Newsstand comics were routinely dated two or three months later than their actual publication date (so issues that lingered on the shelves unsold wouldn’t appear to be outdated). With a cover date of March 1941, that first issue of Captain America was likely created in late 1940 or early 1941. The U.S. entry into the Second World War was nearly a year in the future.

When Simon and partner Jack Kirby were looking for a villain for their new comic book, they didn’t have to venture into the realm of fantasy – there was horror enough arising in Europe. Concluding that the best comics were the ones with the best villains, Simon thought, “Let’s get a real live villain.” Hitler was the obvious choice. As Simon wrote in his autobiography, Joe Simon: My Life in Comics, “We knew what was happening in Europe, and were outraged by the Nazis – totally outraged. We thought it was a good time for a patriotic hero.” And thus Captain America was created to go up against the rising Nazi threat.

Simon and Kirby did give Captain America a fantastical opponent — the Red Skull, the idea for which came to Simon as he watched hot fudge dripping down the ice cream on a sundae. Simon was struck by how the pattern of the fudge looked like arms and legs, and he began to imagine a new villain – one who oozed all over the place and could be called Hot Fudge. He quickly rejected that idea. He then realized the cherry on top of the sundae resembled a skull and thought, “Red Skull … that sounds good.” And Captain America’s arch-villain was born.

In creating Captain America, Simon sought to devise something different from the spate of superhero characters that appeared following the success of Superman in 1938. “Comics used to be right out of a mold,” he told the audience at New York Comic Con. At industry leader DC Comics, Simon said, “You put all the ingredients in a cake, shake it, twist it around — and out would come a DC comic…. We came out with something different. Jack Kirby’s great artwork was totally different from anything that DC was putting out.”

Simon went on to create other remarkable heroes and villains, many in conjunction with Kirby. The team developed the Sandman, the Blue Bolt, the Newsboy Legion, the Boy Commandos, Manhunter, and many others. The pair also worked in a wide range of genres beyond superheroes, including titles focused on crime, war, romance, western adventure, horror, and humor.

Throughout his long career, Simon worked with many of the major figures in the industry. Stan Lee, the longtime Marvel Comics writer and editor – and one of the best known and most influential people in the industry – began his career working with Simon as, in Simon’s words, his “assistant and gopher.” Speaking at New York Comic Con, Simon said, “[Stan Lee] is a good guy. I like Stan.” He then jokingly added, “I made him what he is today.”

Simon was one of a number of early comic book creators who later fought for the rights to their earlier work. As Captain America continued to generate revenue through comic books and other forms of popular entertainment, Simon sought to reclaim the copyright to the character. His legal battle with Marvel over Captain America was eventually settled out of court.

Throughout his career Simon seemed intrigued by what makes someone a hero. It was a fascination that began early in his life.

At New York Comic Con, Simon relayed the story of an old veteran from the Civil War who visited his school when he was eight or nine years old. The man proudly held an old 35-star U.S. flag and burst into song, “Ah, the old flag never touched the ground, boys. The dear old flag was never down….” He shook the hand of each student declaring, “Shake the hand that shook the hand of Abraham Lincoln!”

A key moment in the tale was Simon’s account of the difference in the reaction of the teacher and the students to the old soldier. As the man rambled on, at one point the teacher, standing behind him, twirled her finger around while pointing at her head. In her view, the old man was a bit loony. Simon and the young students, however, saw something different. “None of us agreed with her,” Simon told the Comic Con audience. “We thought this guy was a great, great American hero.”

It was clearly a story that made an impact on Simon. It serves as the preface to his autobiography published in 2011, in which Simon wrote, “I would always remember the odd little fighting man as I continued in my life-long quest for the great American Hero. Eventually I would find him … and more.”

The version of the story Simon spun at New York Comic Con was long and rambling, often skipping around from point to point. But, even if his narrative did meander, his memory of the event – after close to a century – was clear and sharp. To the admiring audience, he must have seemed much like the character in his own story: aged – even a bit doddering – yet still an icon of an earlier era of heroism.

Update [December 19, 2011]: A version of this article is also published in Knowledge@Wharton.

The image from Captain America includes fictional, copyrighted characters and a copyrighted publication. It is believed that the use of a web-resolution image for identification and critical commentary qualifies as fair use under United States copyright law.

One thought on “Joe Simon and the Great American Hero”